Edit Rázsó asked me to design a memorial for those who did not die but whose life was ruined after 1944. The concrete box was prepared in Csepel, containing the statue created by László Péterfy and a metal mirror, closed by an iron-barred door. We had it transported to Tabán with a crane truck for the unveiling ceremony. There was this large group of people in a vacant area when the truck arrived and the memorial was hoisted to the designated spot. Then Edit Rázsó and me stood in front of it, with her smiling and tears pouring down her face, since she never thought that this initiative would be implemented in her lifetime.”

“So the memorial of our days would be one that was installed unlicensed at the Tabán in 1996, on a private initiative and financed from donations. It is intended to commemorate those who were not killed but whose life was ruined or crippled in the intervening decades. The memorial created by Imre Makovecz and László Péterffy is not shocking, it is not about philosophy, ideas or about Christian martyrdom.

…The context of the work is the ‘other history’ that we carry in ourselves and our everyday lives. The reference to reality is rendered by the passer-by who approaches the memorial in the park. Still, the creation is open: the figure is among us and even though it reminds us of the past, we are its living realm. The location of the memorial is not a specific place of remembrance, perhaps nothing happened right there. However, as it is a public park, anyone can wake up to his or her own past and reality there.” 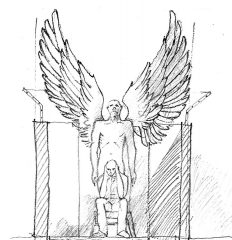 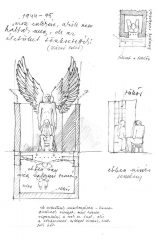 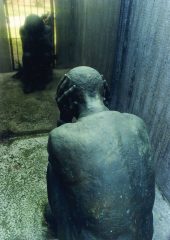 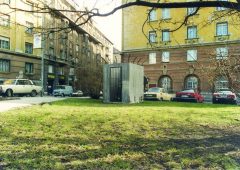