The farm building is a typical U-shaped, Hungarian peasant house, but only the inner side of the U is traditional in its design. The outer side is open with a roof resting on branched trees, a structure that creates a transition to the surrounding forest. This arrangement not only facilitates the presentation of the old village house but also enables visitors to perceive the intricate interactions between the built and the natural environment. City children who visit the place can see a real farmhouse in operation. The building comprises the dwelling of the family that takes care of the animals, a café terrace, a machine shed and a rental kiosk. In addition to using a fachwerk structure, this is the first application of branched trees. The name Mócsai commemorates a man who escaped to this area in the period when joining cooperatives was mandatory for farmers.

Even the first glance at the Mócsai farmhouse reveals that it is a building that conveys perceivably complex and symbolic contents. The house is sharply divided into two parts, in appearance, structure and function alike. It consists of an inner core and an outer element. What is most striking is that these two parts are put together as a montage, creating an almost shocking effect. The inner core is half of a U-shaped mansion, resembling 19th century classicism, possessing all the attendant stylistic characteristics. The gabled facades, the two legs of the U and the carefully elaborated details are all divided along their vertical axis. Only the roof’s shape continues the expected mass form. But the outer half, the freely held roof supported by cleaned branches, is less set in form and turns towards the core building, perpendicular to the gable at the borderline. 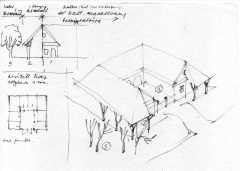 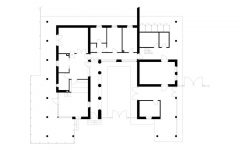 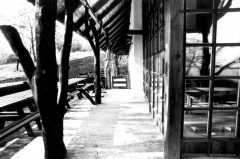 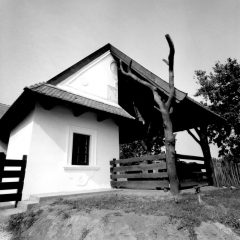 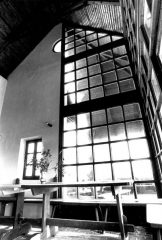 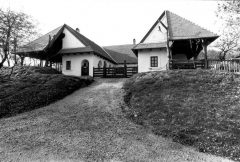