“The existing building of the mortuary at Farkasrét was erected in the early 1930s. The right wing, housing the chapel was destroyed by a bomb in World War II. The remaining walls were rebuilt as a colombarium. We merged the five middle rooms into a single, more spacious one and attached the corridor in the front to the ceremonial rooms. Nothing was changed on the outside of the building. “When the building underwent full refurbishment in 1991, the four side rooms were transformed into two mortuaries while part of the original furniture was kept.”

“I wanted to make the interiors of the mortuary resemble the inside of a human chest. The “ribs” were made of hardwood and the coffin is placed where the heart would be.”

“Made of glued wood, the delicately curved arches run down to the ground but open up like a flower cup towards the exit. The entrance is through winged timber doors that represent the first application of the wing motif in Imre Makovecz’s oeuvre. The detached symbols made for the head of the catafalque, the cross and the Tree of Life soon disappeared during everyday use. The applied artist Gábor Mezei designed the chairs that are built in between the wooden ribs.”

Friends and followers paid their final farewells to Imre Makovecz here on 8 October 2011. His memorial monument is a 250 metre walk from the mortuary. The monument was originally designed by Imre Makovecz as a station of the cross for Nagykapornak, a village where he spent his childhood summers. 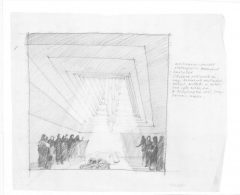 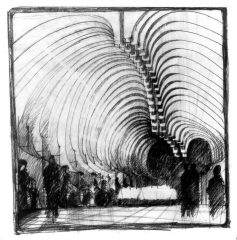 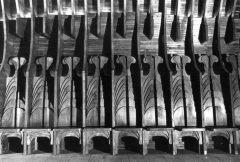 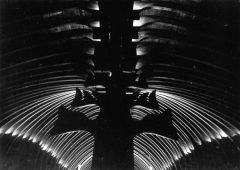 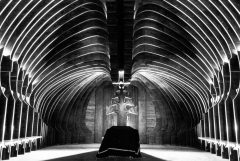 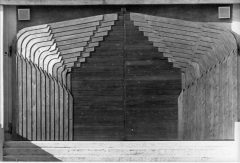