Kakasd lost its population in the times when the Turks ravaged Hungary. Swabians repopulated the place, escaping from the Thirty Years’ War and religious persecution in Germany. Their homes and churches followed the architectural forms of their one-time homeland. They retained their mother tongue, their culture and were successful at farming for three
hundred years.
At the end of the 18th century, empress Maria Theresa’s aspiration to transform Hungary’s feudal structure generated conflict with the Szeklers who enjoyed privileged status. In 1764, the Austrian army responded to a peaceful Szekler protest with a massacre. The population of several villages were forced to flee; some went to Moldavia, others to Bukovina. The latter founded five villages, and one of them is Andrásfalva. They retained their culture in a similar way to the Swabians who escaped to Hungary.
In 1941, the population of these five villages set out to return to Hungary. After years of wandering and a series of forced relocations, in 1945 they were resettled in villages where a section of the Swabian population had been expelled to Germany on charges of alleged collaboration with the Nazi occupiers. This happened in Kakasd, too. The culture centre is being built for this new, dual-rooted community. On one side of the building stands a replica of a typical Swabian church tower, placed on the ground. It is rotated horizontally by 45 degrees, making the visitor perceive the door opening as a face.
The tower is there, too. Before it is the immense statue of a rafting Swabian, pulling the floating tower behind him. (The sculpture, unfortunately, was never implemented.) On the other side, we see the loose replica of a traditional Szekler bell tower, a poetic metaphor for the real thing.
Inside the tower is the negative of the destroyed two hundred year old Andrásfalva tower, with this new element appearing as if it was the casting mould of the old.
Behind the Swabian tower is a bank, behind the Szekler tower is a great hall hosting dances and meetings, and there is a pub in between the two. Regardless of ethnic origin, the people of Kakasd took part in the construction, not only to make the building cheaper but also to make it the fruit of their own work. 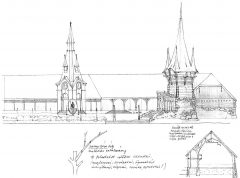 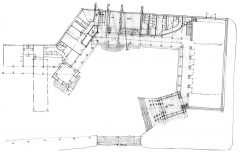 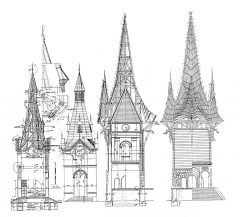 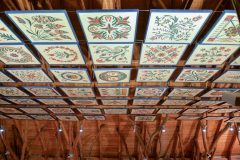 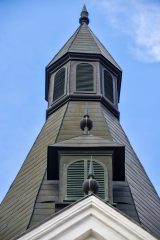 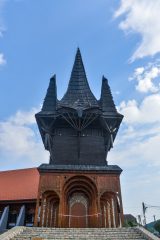 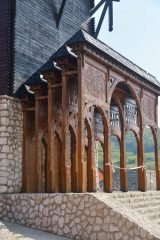 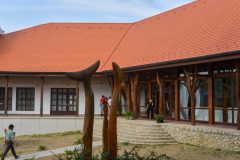