“In the era of spontaneous privatization, a small mall was built in Visegrád on the bank of the Danube. At that time, we prepared plans for extending the local school and then the idea cropped up that a tourism-related development could be launched next to the main road crossing Visegrád. I got the assignment and I devised what could be placed there. The core of the concept was to return to the original city layout because what is there now is different from the renaissance and medieval structure: today the streets run at right angles to the old ones. We came up with a plan of a mixed development accommodating residential and tourism facilities, i.e. apartments, workshops, pensions and shops. We designed it with fachwerk structures to recall the feel of the medieval settlement, but it is also extreme and surreal at the same time, moving backwards in time, like a sci-fi alternative dimension …”

The building revives the historical past of the place – the fachwerk recalls the traditional building method of Swabians who populated the village after 150 years of Turkish occupation, while thestonewall evokes memories of the renaissance era. Thus the gymnasium also recalls Visegrád’s past and exists as a city space among the fachwerk houses. At the same time, it also resembles a spacious glade in the forest sitting among large metaphoric supporting beams blossoming with floral windows. 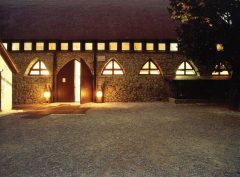 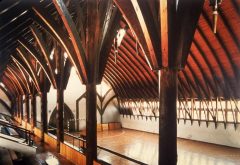 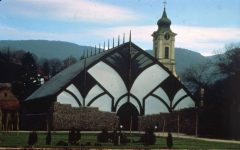 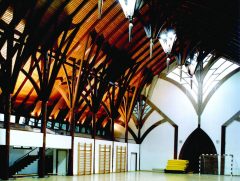 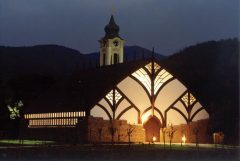